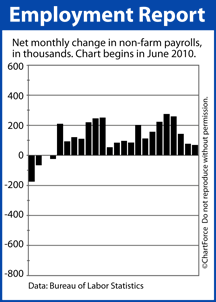 For the second straight year, the jobs market looks to be slowing into the summer.

Last Friday, in its monthly Non-Farm Payrolls report for May 2012, the Bureau of Labor Statistics reported 69,000 net new jobs created, plus a one-tick rise in the national Unemployment Rate to 8.2%.

Last year, between May and August, the jobs market was decidedly worse as compared to the rest of the year, adding just 80,000 jobs on average per month as compared to 190,000 new jobs created on average during each of the other 8 months.

This year, a similar slowdown may be in store.

Although the May jobs report marks the 20th consecutive month during which the U.S. economy added new jobs, the reported figure fell well short of analyst expectations, which called for 150,000 net new jobs last month.

In addition, it was found that the previously-reported tallies for new jobs created in March and April were overstated by a total of forty-seven thousand jobs. This lowered the overall net new jobs created last month to 22,000.

Mortgage rates in Parkland and Coral Springs are falling on the news.

The weaker-than-expected data has moved Wall Street investors away from stock markets in favor of the relative safety of bond markets, a market which includes the one for mortgage-backed bonds. When mortgage-backed bonds are in demand like this, it helps to push down mortgage rates nationwide.

Mortgage rates are expected to make new lows this week, in part, because of U.S. employment weakness. Should this year’s jobs market rebound like in 2011, though, look for mortgage rates to climb back shortly.