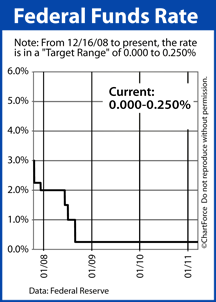 The Federal Open Market Committee meets today in Washington D.C. The FOMC is a special group within the Federal Reserve, led by Fed Chairman Ben Bernanke, and consisting of 12 members.

The FOMC’s official schedule calls for 8 meetings annually at which it reviews the nation’s economic and financial conditions, and chooses whether to change existing monetary policy.

Today’s FOMC meeting represents a bona fide risk to home buyers and rate shoppers in Parkland and across the country. This is because when the Fed meets, Wall Street gets nervous which, in turn, causes mortgage rates to get volatile. And, as mortgage rates go, so goes home affordability.

Rate shoppers learned this the hard way after the FOMC’s last meeting.

In January, Wall Street deemed the Fed’s status quo message too soft on the looming threat of inflation. As a result, conforming mortgage rates rose through 7 of the next 10 days, driving pricing to its worst levels of the year.

This may happen again beginning today.

At 2:15 PM ET, the FOMC will adjourn and make a press release to the markets. The Fed is expected to keep the Fed Funds Rate near its target range of 0.000 percent, and to keep its $600 billion bond buy program in place. That doesn’t mean mortgage rates will idle, however.

Depending on the verbiage of the Fed’s statement, Wall Street will make its new bets. A tough approach on inflation should push mortgage rates down; a soft approach should pressure rates up. Either way, you may want to lock your mortgage rate prior to 2:15 PM ET — just to be safe.

Once the Fed adjourns, you’re at the market’s mercy.