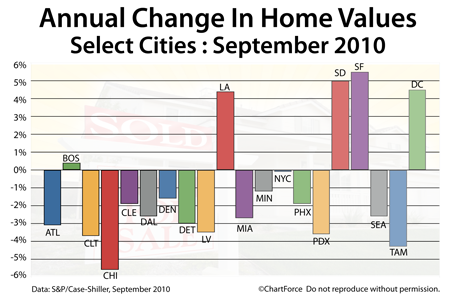 Case-Shiller representatives assessed the findings as “another weak report; weaker than last month”, citing deterioration in 18 of 20 tracked markets. Upward pricing momentum from the summer is slowing and values remain 30% off the market’s June 2006 peak. It could spell bad news for home sellers this winter.

That said, the Case-Shiller Index is imperfect; its methodology flawed. The index is not meant for use by individual buyers or sellers — for 3 reasons.

First, the Case-Shiller Index reports on a 2-month delay. Today is December 1 and we’re discussing data from September. In the 8 weeks since, the economy has shifted to a net jobs gainer, and the Federal Reserve has committed to $600 billion in re-investment.  These are major developments that weren’t a part of September’s housing market, but are relevant today.

Especially because employment is largely believed to be a keystone to housing.

Second, the Case-Shiller sample set is limited to just 20 cities nationwide. This means that most U.S. home sales are specifically not included in the Case-Shiller Index’s monthly findings.

And that ties into reason number three — all real estate is local. No matter what the Case-Shiller Index says about the country, what matters to your local market is what’s happening in your local market. Each neighborhood has its own housing economy and that’s something that can’t be captured by a national report.